1. How does a geothermal system work

4. What does geothermal mean to the environment?
Because geothermal systems work with nature, not against it, they minimize the threats of acid rain, air pollution and the greenhouse effect. An environmentally friendly fluid is used in the closed, continuous loop.

5. Do geothermal systems require much maintenance?
No. In fact, geothermal systems are practically maintenance free. When installed properly, the buried loop will last for generations. And the other half of the operation--the unit's fan, compressor and pump--is housed indoors, protected from the harsh weather conditions. Usually, periodic checks and filter changes are the only required maintenance.

6. How much money can I save with a Geothermal System in my home?
In a technology defined by numbers, here's a fact that everyone will understand: You'll pay several thousand more up front, but in many cases, the payback can come in as little as 5 to 7 years.  And once the system is paid off, the annual return on investment can approach 15-20%.  Add impressive durability and less-intrusive trenching methods and the scales begin to tip, at least in the new home market.  But, Geothermal systems can also be installed in existing homes as well.  It will also increase the value of your home.  Many people comment on how "clean" geothermal heat & cooling is for their home.  There is virtually no dust since fossil fuels are not involved.  It is much healthier for you and the environment. 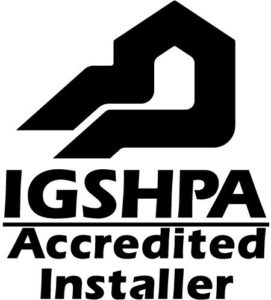